The earthy Ganesh idol, sitting on my bedroom dresser today has a special meaning in my life. Simply adorned with a hint of turmeric yellow on its body and a dot of red on the forehead, it serves as a harbinger of good vibes and wisdom. For me, it weaves a tale of two different Indian families, one migrant, other immigrant,  who met at a street market in Mauritius, but, strangely united in one common thread, of Hindu culture.

And it all happened in the street market at Curepipe, Mauritius.

As Mauritius was the first country I moved to after leaving India, I was soon homesick. I yearned for Indian food and festivities, like Ganesh Puja. In Hindu traditions, Lord Ganesh is regarded as symbol of wisdom and a remover of obstacles. I too wanted a Ganesh idol in my prayer altar – to remove any obstacles while settling into a new country. Expat friends suggested visiting the local market where I could get a glimpse of Mauritian life and culture whilst searching for Indian religious items.  Maybe I get treated to an impromptu Sega dance with its rhythmic lively Creole music or listen to popular Indian Bollywood music that entertained the migrant Bihari community. A culture clash? 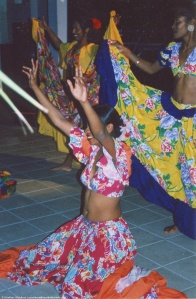 So come Friday, I walked to nearby Curepipe bus stand. The main street gradually began to swell as stall owners arrived with loads of tropical fruit and vegetables, pulses and spices, car loads of cloth materials, fresh flowers from farms and street food. It was a busy, energetic atmosphere. Dressed in vibrant colours, large floral prints the local Creole community boasted their robust and big bodies. With thick curly hair and dark skin, the Creoles suddenly reminded me of their African origins. In contrast, the Asian /Chinese migrants had petite body and straight, black hair. One can easily spot the odd Indian too. The women wear either long, flowing skirts or brightly coloured synthetic sarees. Truly, the country’s populace was well represented at the market, a totally new experience for me. Mauritius could be advertised as – One country, many cultures.

Street stalls were briskly set up. Frail, tall bamboo poles stood upright. They held up bright, blue polystyrene sheets that happily flapped in the gusty winds of the periodic cyclones that lash the tropical island serenity.

My eyes soaked in the mélange of colours. Creole stall vendors stacked fresh vegetables like cabbage, broad beans, Pomme d’amour or Tomato, chilli peppers and even sickly discolored onions! ‘Blame them on the heavy rains!’ shouted the angry shopkeeper. Local spices like ginger, bay leaves, fresh mint and lemons were suddenly are in great demand in rainy /stormy weather. ‘Make hot ginger –lemon tea’ cajoled the Chinese lady vendor ‘it will keep out the cold and dampness in your chest’ she added.

Creole cooking is simple.  …..perfect blend of French and local Mauritian tastes. The popular Gateau pimento and Dholl Puri stalls made brisk sales every market day. Snacking on tangy, spicy Lima beans in gravy sauce, served with large round Puri, fried breads made vegetable shopping such a pleasure!  As the sizzling chilly hit my mouth, water trickled down my nose and passers-by sneered at me jokingly. They knew this was my maiden venture. I soon found out that Gateau pimento or chili cakes are available at street stalls in small paper bags. These are popular snacks of the locals. Though served hot from a big frying pan, they can also be taken away and be eaten cold. Interestingly, the food item has a French name, but Indian origins!

Here is a link ( from Internet) for a Mauritian recipe :

No sight of any Ganesh idol and Indian stalls as yet ? I thought aloud. I walked past the section selling cloth materials. Rolled up bundles of pretty lace materials, colourful prints and bright chequered cloth lay stacked on the pavement. Once again a mélange of cultures – French dress their windows with soft lace curtains, Chinese prefer colourful animal prints for their two-piece clothing sets and Indian women don colourful sarees and skirts. Well, I too can dress my windows with my spot market purchase of 5 meters of lace curtain.

Ah! Did I hear some Bollywood music at the far end? My heart raced, my steps brisker as I paced in that direction. Dark skinned, fat women sat crouched on the street pavement. Dressed like Indian women(in sarees) they were huddled together with young children playing nearby. I stood there for a second – at last I spotted a mini India!

Could the stall owners converse in Hindi, I wondered? ‘Bhaiyya, brother, where I can find a Ganesh prayer idol? ‘I begged. Soon Sookdeeo and his family, the stall owners greeted me with much appreciation and admiration, being a fellow Indian. The warmth and hospitality were touching, as they handed me some savouries and inquired about India, speaking in Bihari Hindi, a dialect I was unaccustomed to. It was an instant bond.

Over several Friday visits to Curepipe market, they related their harsh stories of migration. As their ancestors, brought as labourers by the British and French rulers, arrived to Mauritius on crowded boats, over 100 years ago, the families stayed on in Mauritius, making it a home away from home towns in India. Working long, sunny hours on sugar cane fields darkened their skins even more. Then, Indian food was scarce and adapting life to the local culture, a demand. Gradually, they survived, keeping the cultural lamp glowing in their new homeland.

I ate another plate of dholl puri – These Mauritian flatbreads have a filling of cooked yellow split peas. They’re served warm wrapped around curries, achards (pickled vegetables). Somehow dholl puri reminded me of a sweeter version my mother used to make ( Puran poli, also made with a filling of cooked yellow lentils ground finely and mashed with mounds of jaggery and coconut trimming).  Sookdeeo’s ancestors helped in the making of the first Hindu temple in Mauritius! They even made prayer idols using rich volcanic clay soil from the island, instead of river soil as done in India!

Finally, I had found my local artisan and the much longed for idol of Ganesh! In the following weeks I brought home a specially moulded Ganesh idol.My market visits had interwoven two Hindu migrant families. As if, Lord Ganesh gave us a ray of hope and wisdom – to learn and bloom in the new cultural environment while adapting to the ethnic life of this beautiful island of Mauritius.

I would sum up the true Mauritian way of life –

‘If you start your day with Continental breakfast, followed by Chinese lunch and finish with Indian dinner, accompanied with French wine’ it would mean a culturally balanced Mauritian way of life.