Abu Dhabi, UAE is a vibrant, affluent emerging city, carving its distinct identity. Many workers and professionals are increasingly arriving here. That makes for a cosmopolitan society, parallel to the local Emiratis. It’s the labourers and workers, building a new Abu Dhabi, that create a rich tapestry of ethnic cultures, food and clothing. What is life like for these migrants? How do they live? Where do they work?

I decided to find out by visiting the local fresh market at Al Mina, very near the Zayed port. Come listen to the personal stories behind the faces of migrant community working at the market. The city’s history from another angle.

On a bright sunny day, armed with my camera ( and shopping bag) I alighted from the bus and walked over to the container sheds storing fresh produce. Bright, colourful vegetables, sat on makeshift outdoor stalls, either as neat packages or arranged loosely. The market is open every day of the week. During hot summers, its quiet business during the day, but brisk once the sun sets. However, during winter, the place is busy all day. The evenings are busiest, with ample lighting extended onto the adjacent road. Baazar style many market stalls suddenly spring up, and ethnic vendors call out their prices, as competition mounts. Typically, mid eastern culture suddenly alive with robust vendors.

I quickly took note of the stares and glares as I took random photos. Gulf region has a conservative society,local women rarely walk unaccompanied by male member, let alone flash a camera. It was best to tag along my husband, that would ease and initiate conversations.

And here is the same market on a cool winter evening. Date palm trees in the background make a perfect backdrop to the open-air market. Stalls were teeming with fresh greens, herbs, spring onions and salad vegetables from neighbouring Oman and the oasis city of Al Ain. 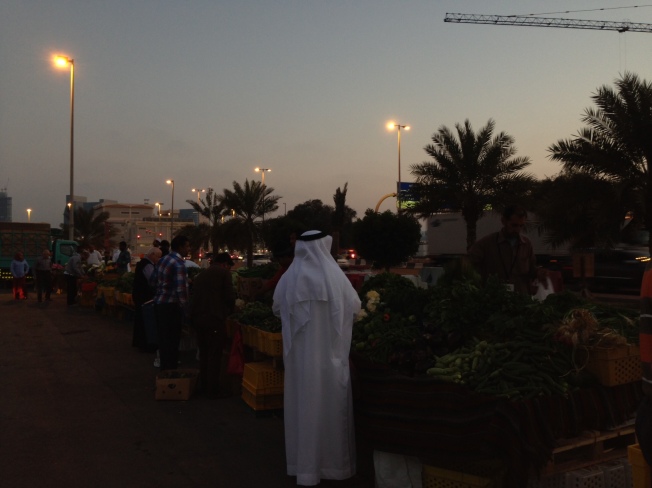 Let me introduce my ‘heroes’ – They were willing to share personal stories and permitted photos.

This is Farooqi, aged 60+. As a young man at age 20, he worked in Saudi Arabia, as a construction worker doing back-breaking work. He has moved to UAE  5-7 years ago, and prefers to work in less harsh commitments and temperatures. He has sold watermelons at this stall for  5 years. Farooqi hails from Afghanistan, his family still lives there.  A devout Muslim, he prays 5 times during the day, laying the prayer mat under the stall for mid-day prayers and then folding it neatly back. His delicate laced Muslim prayer cap, has worn with age, but he cherishes it. As he strokes his long silvery beard, characteristic of Muslim culture, I know he fondly remembers his struggle to earn a living and staying away from his family, experiences that have shaped his life.

What  Afghani food does Farooqi like ? ‘ My mother used to bake hot bread on the Tandoor and serve with mutton korma’ he smiles, stroking his beard.

Farooqi mentioned that the shop owner gets about 5- 8 tonnes of water melons from Iran, once a week. It takes 2 days to unload the fruit container from nearby Zayed port. Bangladeshi workers then, load the fruit onto trucks, and offload them at Al Mina market. Farooqi oversees the process from there to the market stalls, and the proper storage of fruit. As an elder, he often counsels younger male workers.

Here are deep oval, juicy watermelons just arrived from Iran. Iranian soil is so fertile, each melon weighs 8-10 kilo-! It’s a summer fruit, and popular Persian /Iranian  fresh juice is often spiked with lemon and mint, both or which are found in abundance. Families enjoy water-melon juice in summer.

This man is from Yemen. His elaborate head-gear and loose tunic help identify. He refused to look at the camera, in typical reserved mid-eastern culture. The cotton head-gear called Kheffiyeh differes from region to region. It is  loosely folded scarf, used to protect the face and eyes from the harsh sun and sandstorms. When folded into a half, the broad end of triangle is tied around the head,  the pointed corners drop off on shoulders, or are tucked into the folds. Simple Kheffiyeh used daily are devoid of embroidery and tassels, and are made of rough cotton. Kheffiyeh with shiny tassels, richer fabric, embroidered edges are reserved for festive wear or denotes higher status.  Kheffiyeh is also known as Gutrah in other Middle East regions, and is like a turban.

My husband initiated conversations with 2 men from Pakistan to stop them staring curiously at me and the camera. We bought a bag of red onions. Abdullah, aged 30, is from Peshawar, Pakistan. He still misses his family, rustic home and village chatter even after 5-6 years of working here. He always dons traditional shalwar /kurta, like most other Pakistani and Afghani people. This dress is different from the UAE’s white, flowing robe. Like other Muslims, he too grows a beard.

Working in Abu Dhabi for 5 years has not at all been an easy living. But dreams of earning more and providing for his daughter’s marriage and dowry, brought him here. He visits his family in Peshawar once every 2 years. In UAE, living in densely packed dormitories near construction areas, working long hours, back-breaking loading and offloading crates of fruit, inablility to speak English or Arabic are some of the problems he faces. In a bid to repay loans taken in his village and construct his own house on his farm, Abdullah saves every penny of his meagre income and does not complain of the sweltering summer heat. His boss permits him to skype with family once a month on a village portal.

A stall helper from Peshawar, Pakistan.

Mohinuddin is from the southern state of Kerala, India. He gladly obliged for a photo, learning I too came from India. He pointed at the various vegetables that came from Oman, Pakistan, and Kerala, India. He has lived in UAE for over 10 years, and is now the co-stall owner, putting in all his savings to start this business. He employs 5 other workers from his home state. He is wearing a Topi , or prayer cap. It has delicate crochet work, and when folded fits into the pocket. Topi is regional of Muslims from Pakistan, Sindh, Malabar Indians and Bangla Desh.

What food does he like? ‘Fresh prawn curry in coconut milk and festive Onam sadya’  he says with a smile. Typical Malabar coastal food. Thank you Mohinuddin – maybe I should take your recipe!

Here is another stall owner from Kerala. Dressed in modern simple clothing in shirt /trousers Jameel, introduced himself as care taker of this stall. He prides in  keeping his stall clean and competitive prices. After initial hardship and living in Gulf region on his own, he set up business to enable to bring his wife and family to UAE. His son helps him after school hours. Though he is Muslim, his views are more broad-minded. His wife works at a nearby school, and children help her at home.

And what food do they eat? They like the Arabic cuisine of lamb, meat and rich dairy products. 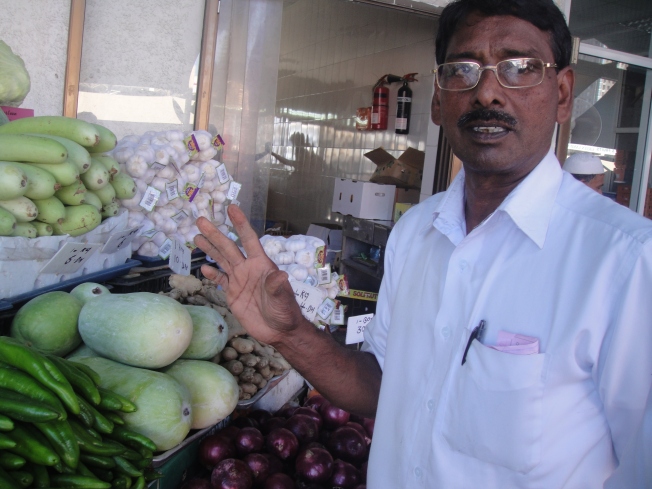 I was a bit cautious and apprehensive to take photos of local Emirati, as they at times are rude and may get offended.

Emirati men wear long, flowing, white robes called  Dishsadasha or (kandoura) and white head cloth (ghutrah) It is tied back on the head with a clack rope (aqal). Frequently, men will sport a beard and moustache. The women wear long, flowing black Abeyas. The head covering is called Sheyla. They wear long sleeves to cover their arms. Many sport elaborate eye and lip make-up, that much defines the social status.

What is Emirati food? Well, as the climate and soil are harsh – they depend much on grains, meat and dairy. Camel and goat’s milk is popular in form of ice creams, cheese and milk. Eggs and Khuboos ( roti) are made over hot inverted mud plates, similar to Tandoor ovens. Recently,the city is abundantly greened with Date trees. Guests ( at hotels and homes) are traditional welcomed with a serving of Dates and Arabic coffee, ceremonially poured out from the Dallah or coffee pot. 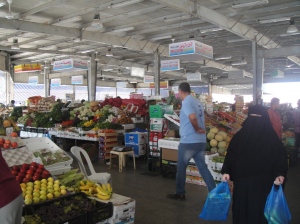 I visited the Al Mina market at night during winter months. The streets adjacent to the stalls were brimming with loads of extra vegetables that come from Oman and Al Ain. Winter vegetables, so fresh! Among the numerous buyers, men and women were Jordanian, Yemenese, Lebanese, Indian, Pakistani and Emiratis. Such a diverse geographical group. However, expat British and Americans would rather shop at the supermarkets, than deal with local customs and people. I guess for ease. 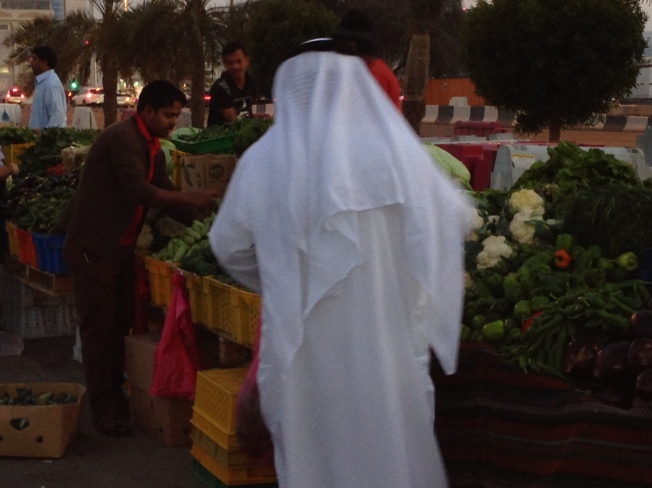 The Pathan from Afghanistan caught my eye, he was an ‘errand boy’ taking quick steps in tune with local customers and finally putting thier purchase into shining expensive cars. Dressed in typical white Shalwar /Kurta and loose turban  he was happily pushing the wheelbarrow turned into pushcart, following an Emirati buyer. As soon as he loaded the groceries into his car, he quickly came over to us, indeed to make another ‘paid’ errand.

‘No, no’ said my husband and began talking to him in Hindi. His eye lit up on hearing ‘Saheb’ speak in Hindi. He proudly introduced himself as an Afghani Pathan….no, no, not a push -cart errand man ! Did I hurt his dignity? Pathan community is very strong and hard-working,and the universal success behind them is to do any work willingly and with dedication. He was new comer to Abu Dhabi, having lived earlier in Dubai and Saudi Arabia, working in building construction.

He pointed to high-rise buildings outside the market and said ‘we sweat in the heat and work in the sun. In our country, we are poor because of the war and terrorists. Our families, girls are scared – but we men are strong.’ What a emotional and practical take on the life and responsibility in shaping Abu Dhabi as well as their own homes in war-torn Afghanistan. My eyes dimmed with tears and I greeted him a Salaam.

What does he like to eat in Abu Dhabi ?

‘Not enough money to enjoy here. But I like to cook meat and pilaf for my fellow mates in the dormitories. Sometimes on festival we cook and eat together, then we dance to songs or go to see cricket match.’ 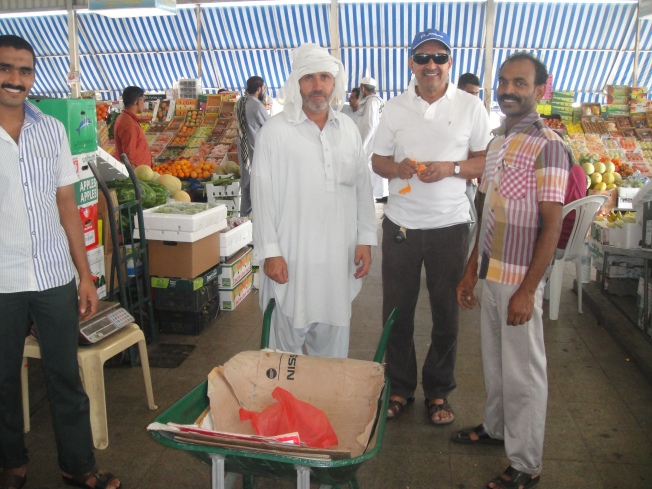 Have you heard any stories about lives of immigrant workers anywhere else in markets? How does working far away from home affect them ? What changes does it bring to the workers and their families ? Do post your thoughts.

Till then, let the colours of fruits and vegetables liven your spirits and welcome you to the market.