As we begin a new year 2016, I’ve thought up new ideas, new perspectives of learning about the markets. Here is a new series.

For each month this year, I will present a closer look at certain objects  around markets. Be it fruits or flower arrangements, weather or stall set ups. Something’s has to be unique isn’t it?  Otherwise all markets would generally be the same: tables, stands, fruits and vegetables, baskets, vendors, chaos and noise.

No, no…there’s much more. Focus!

Markets are just a common meeting place for trade and business. Through the centuries, every town or city has evolved and matured socially, culturally and historically by placing the market at its centre. A place to feel the buzz and hear the pulse of the town as people gather together to buy and sell, be it daily or weekly.

Europe is famous for its piazza and its historic market squares. Some are literally hundreds of years old and cherished till date. Though mostly selling fruit and vegetables, often they double up as festive Christmas markets. 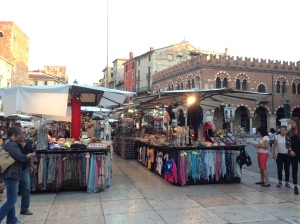 This open air market in the square in Verona is elegantly surrounded by colourful residential buildings as well as historic ones too! One side are the lemon, red, orange and pale yellow hued wall to wall buildings. In contrast, stands out the large brick coloured Casa dei Mercanti (house of rich merchant). This is on the south side, gets more sun. Beautifully crenallated with majestic arches on the floor level and a double window arch on the upper floor, marks a significant architectural design.

Northern side is the high bell tower, a characteristic of most European towns to keep a constant mark of the day and time of the year. The most charming monument here is the Madonna Verona, Fountain of Madonna (1368) in the centre where tourists and locals can relax their tired legs or a place for the children to play and frolic.

The variety of colours, architectural plans and a market full of colourful and artistic face masks, scarves, fruits and candy stalls were an melange of contrasts!

Right next to the historic and majestic Charminar, is the ever popular chudi or bangle bazaar. To date, the over crowded street and tight row of shops presents a claustrophobic and buzzing atmosphere. It’s English name is a translation of two words: char means 4, minar means minaret. This imposing mosque, predominantly in Islamic architecture was built in 1591 by erstwhile Nizam rulers of Qutb Shahi dynasty. Dare to climb up…its more than 150 steps!

Summer or winter, sun or snow. The weekly market fill the streets from Barenplatz  to the opposite side, Bundeshaus square. The entire area spreads from the Berne Bahnhoff station to the majestic Federal Assembly building. The market has stalls of fresh vegetables, fruits, flowers and assorted bread, well situated to feed the hungry commuters alighting from the nearby train station.

The backdrop of the stately building with the towering green domes, sprinkled with lines of golden paint and a decorated frontal façade of pillars presents an aura! The west wing was started in 1852, and the east wing was added in 1884. A total of 38 Swiss artists /architects are responsible for its creation, chief architect being Hans Willem Auer. 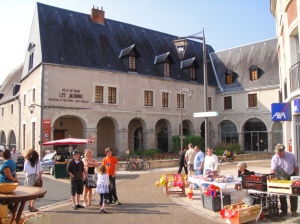 The medieval town of Blois, that was once the playground for archery, relaxation and sporting events for the aristocrats, was much destroyed in WW2 . With much restoration of its classic stone buildings the town has sprung back onto the tourist itinerary and cycling event track.

The weekly market shifts from one area to another thus covering the entire town and supporting its residents. The vendors move their stalls and produce each day. Bread, cheese, and coffee tables are plenty.

Ville de Blois Les Jacobins stands at the other quieter end of the town market. A solid square building in soft toned stone and characteristic sloping, dark coloured roof marks a statement. Recently the place has been converted to a museum.

What did you think about this new series? Any suggestions?